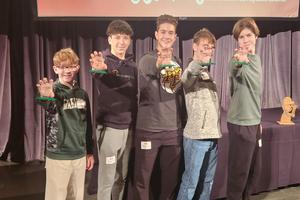 The Penn-Trafford ‘Chain Reaction’ teams visited the Carnegie Science Center in December to participate in the SciYinz Chain Reaction Challenge.


The objective of the competition was to build a Rube Goldberg machine that completes an assigned task in only 10 steps. After creating a rough design sketch of their idea, the teams began building their machines from a variety of recycled materials and cardboard.


Each project was built in under 4 hours and encompassed a working contraption as well as a presentation to the Carnegie Science Center judges. Team One executes their design Team Two upon completion of their machine Team One stands behind their completed machine