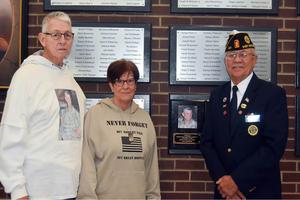 The Trafford American Legion Post 331 recently presented a plaque to Penn-Trafford High School for inclusion in the school’s ‘Honor Wall’ which recognizes alumni who have served our country in one of the five military branches.  The wall, located in the school’s main entrance, features engraved plates with the names of alumni who serve now or have served in the military.

The Honor Wall doesn’t memorialize all killed in action alumni…yet.  “When Chris and Jim Fike and I dedicated KIA Robert Fike's plaque at Penn-Trafford, we noticed some veterans' names missing who were students in the school district,” said Jim Drnjevich, Commander at the Trafford American Legion.  “With cooperation and support from the high school, Post 331 plans to continue research providing documentation to update and add names to the high school Honor Wall".


To submit a name of a Penn-Trafford alumni that serve/d in the military, please visit the high school website (https://pths.penntrafford.org) and select ‘Our School’, then ‘Military Honor Wall.’ Jim Drnjevich, and Commander of the Trafford American Legion