Penn-Trafford is Home to Esport Champions 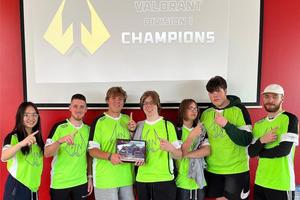 (6-6-22) Congratulations to our Esport athletes and Coach Carlisle!

In the second year since being introduced in 2020, the Penn-Trafford Warrior Esports teams defended their Rocket League and Valorant titles to capture their 4th and 5th championships in the school’s history.  Esports, also known as ‘electronic sports,’ is a form of sports competition using a video game platform.


The championships were hosted by The Esports Company which is based in Johnstown, Pennsylvania. These championships are the closest equivalent to a WPIAL championship in traditional sports. There are over a dozen schools that compete throughout the league in different gaming titles.


The Penn-Trafford teams, coached by teacher Mr. Carlisle, competed on Saturday, May 21st, at Saint Francis University. The Warrior Rocket League team - made up of Dylan Holmes, Ryan McWilliams, Vincent Patalski, and Nick Sandrock - overcame a game 1 loss to defeat Somerset with a score of 4 games to 1. The Valorant team - consisting of Connor Adomaitis, Skyler Hado, Ryan McWilliams, Brayden Seech, AJ Slack, and Emily Truong - defeated Greater Johnstown 2 games to 0 to finish the day with back to back championships.


As the Warrior Esports teams wrap up a great year, they look to continue their success in the Fall.