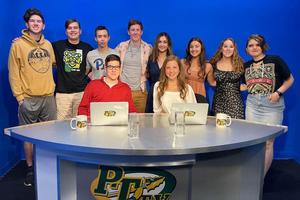 
Awards were given out in fifteen categories, and Penn-Trafford earned nine nominations and three wins.  Winning entries will advance to compete in the National Student Production Awards in the fall.


“Our TV/Video Program continues to grow and lead the way as one of the most innovative, career-building programs not just in our area but in the nation,” commented Penn-Trafford High School Principal Tony Aquilio.  “We look forward to many of our students leaving our campus and having successful futures in the field of TV and film.”

Winners and nominees from Mr. Steve Vinton’s TV Production and Film classes are:


WINNER: Morning Newscast - “Wake Up Warriors” received its 5th consecutive nomination for Best Newscast.  PT won this category for the third time in the last four years.  This award comes with a $1,000 award for the program.  “I'm so glad that my classmates and I were able to put on a newscast considering everything that was working against us this year,” said Becca Mills (Class of ‘22).


WINNER:  PSA - “Equality” by Phelan Newman (Class of ‘23) and Kenny Williams (Class of ‘22).  Phelan and Kenny received a $1,500 cash prize.  “Never in my wildest dreams did we think we’d actually win an Emmy, or even be nominated,” said Phelan Newman.  “This is my first year of video production classes, and one for sure I will never forget. I’m absolutely honored to be in the rankings of such wonderful people.”


NOMINEE: General Assignment - Serious News - “Pandemic Positivity” by Joe Pacelli and Declan Mooney (both of the Class of ‘21).


NOMINEE:  General Assignment, Light News - “Creating a Community” by Sarah Winchell, Elissa Heinbaugh, and Mia Defazio (all from the Class of ‘21)


NOMINEE:  General Assignment, Light News - “The Show Goes On” by Ava Burdell, Ella Coy, and Skyler Hado (all from the Class of ‘22).